AMD ushered in the PCIe 4.0 SSD age with the release of 500-series AM4 boards. Almost three years later, there’s no shortage of fast PCIe 4.0-compliant SSDs to augment your build.

This is a deep dive into the workings of a popular choice among them, TEAMGROUP’s T-Force Cardea Zero Z440. We already had plenty of positive things to say about TEAMGROUP kits in various RAM roundups. Is this attractive NVMe SSD another feather in their cap? Explore our Cardea Zero Z440 review to get a comprehensive answer.

Before we begin examining the drive and its capabilities in earnest, here’s a quick look at its most important technical details:

The spec sheet reveals some telling tidbits about the drive. For instance, it shows that the Z440 has a first-gen Phison E16 controller. While not the newest, it has established itself as reliable.

Its NAND flash is TLC’s 96-layer 3D BiCS4. TEAMGROUP didn’t skimp on longevity either, as the disk has a respectable lifespan of 3,600 terabytes written. It’s backed by a limited five-year warranty, further signaling TEAMGROUP’s trust in its product’s longevity.

Two versions of the Z440 are on offer. We did hands-on testing of the 2TB drive, but you can get a smaller 1TB model as well. Their differences boil down to capacity and a corresponding doubling in the larger drive’s max TBW.

The maximum read and write speeds of 5,000 and 4,400MBps are identical. Padding the lineup with larger and smaller capacities would have been preferable. Still, the two on offer cover a majority of use cases.

Putting the Cardea Zero into context regarding price adds to its appeal. At the time of writing, you could find the 2TB version selling for around $260. That’s about the same as a non-discounted MP600 yet noticeably cheaper than the likes of Samsung’s 980 PRO.

Its price is par for the course in today’s environment. It’s true that the more expensive drive boosts higher max read & write speeds. Most users aren’t likely to notice, even if they dabble in video production or content creation.

So, ultimately, you end up getting quite a nifty package for the price.

If there’s anything to ding TEAMGROUP for, it’s the lack of proprietary disk monitoring utilities. You’ll have to install third-party programs to keep an eye on the drive’s health and access detailed usage breakdowns.

The Cardea Zero Z440 arrives in an attractive box housing a secure blister pack. A picture of the SSD on an abstract red & white background takes center stage on the front.

It is surrounded by blips of info regarding its capacity and the efficiency of the thermal label. Turning the box around reveals simple visual installation instructions and further information on speeds and working environment parameters.

Getting the drive out of its packaging takes some finessing since it’s firmly stuck inside. Once liberated, it makes for an attractive sight with its black & copper thermal label and blue PCB. While not unique, the thermal label is one of the Z440’s main draws. It’s a thin layer composed of copper and graphene that fits under existing motherboard heatsinks.

Having this slim protective layer opens up several options. TEAMGROUP claims that it decreases working temperatures by 9°C. That means you can leave the disk exposed and not worry about thermal throttling even if the slot you’re using it in doesn’t have a heatsink. Alternatively, you should have no trouble mounting your motherboard’s padded heatsink for additional heat mitigation since the label is thin enough to fit under them.

A standard length of 80mm allows the Z440 to integrate into most notebooks seamlessly, not to mention find a home on any supporting AM4 or Intel Rocket / Alder Lake desktop motherboard.

The WhatIfGaming test bench consists of a Gigabyte AORUS X570 Elite motherboard running the Ryzen 5 5600X. We use 16 gigs of TEAMGOUP’s T-Force ARGB Xtreem 3600MHz RAM and a Samsung 970 EVO Plus as the primary drive. The board’s firmware is up to date, and we’re using the Pro edition of Windows 11 as the OS.

Each tested disk is slotted in as the secondary drive. They are formatted and partitioned when the individual test calls for it. The Cardea Zero’s competition is comprised of four SSDs. Two of them also take advantage of PCIe 4.0 speeds. In contrast, the others are PCIe 3.0 to better showcase the standard’s evolution and improvements.

Our battery of tests starts off with the always popular CrystalDiskMark. First, we wanted to test the maximum read and write speeds claimed by the manufacturer. The sequential read/write portion of the test looks as follows:

The Z440 performed as advertised with a negligible difference in sequential write speed. The second PCIe 4.0 drive in the running, the Corsair Force MP600, slightly exceeded its 4950MBps / 4250MBps official results.

The Sabrent Rocket Q4 rounds out the speedy competition and was the most surprising. It’s in third place due to a slower write speed, but real-world results exceed advertised read & write speeds by around 200 and 400MBps, respectively.

This test shows a stark difference between PCIe 3.0 and PCIe 4.0 capabilities. Both the Samsung 970 EVO Plus and Crucial’s P5 are outstanding PCIe 3.0 drives with results that closely conform to their spec sheets. They’re noticeably slower overall, which you’re likely to experience when handling large sequential workloads.

Things take a more interesting turn with the random read & write test. CrystalDiskMark’s first test allows the drives to let loose. This one complicates their lives by introducing random transfers of small 4K files. The results are indicative of the worst performance you can expect from a modern SSD.

The Rocket 4 takes first place in the read portion. TEAMGROUP’s drive follows closely, with the MP600 trailing the other two PCIe 4.0 disks with a score of just over 60MBps. Crucial’s P5 handles itself well despite its PCIe 3.0 limitations, with only the 970 EVO Plus struggling to keep up.

Samsung’s drive redeems itself in the writing portion, scoring first. The Cardea Zero takes a slight lead among the PCIe 4.0 drives, while the P5 is markedly slower than the rest.

Next, we ran the drives through AS-SSD’s copy benchmark to simulate real-world usage. It’s split into three categories. ISO File approximates the time it takes to copy two large files. Programs Folder is made up of multiple smaller files to represent typical program structures. Lastly, Games Folder is a mix of the two since game install folders often contain several large compressed files and many smaller ones.

The Force MP600 takes the lead in all three categories. However, there’s a mere 1% difference between it and the Z440 when copying over games. The most significant disparity between the first and second place winner happens when copying programs. Even then, the MP600 is better by less than 10%.

The Rocket Q4 takes third place, but the drop in speed between it and the other two PCIe 4.0 drives is significant. Even more telling is how little difference there is between it and the P5, the latter scoring considerably better at copying program folders.

PC Mark is a comprehensive set of tools designed to put every aspect of your system through its paces. Among other useful tests, it offers four that focus on storage drive performance. We ran the Full System Drive Benchmark, which uses traces to gauge the system’s response times in various scenarios.

The Cardea Zero Z440 clearly takes the lead here, with Corsair’s drive coming up short by less than 200 points. The P5 puts up another excellent showing by exceeding the 2,000 point mark. The EVO 970 Plus did not fare well by comparison, nor did the Rocket Q4.

Probably the most important question in our readers’ minds is how the Z440 performs for gamer-centric tasks. We used 3D Mark’s Storage Benchmark to find out! It’s a DLC for the venerable 3D benchmarking software that represents a disk’s overall gaming performance with a number derived from a series of relevant tests.

These include loading and saving a game in several popular titles, streaming, and moving game data around.

The average 3DMark Storage Benchmark score is 2,000, so it’s great to see that all of our test drives did well. How the first two spots resolve has become familiar by now. The MP600 is the overall winner, but it doesn’t pull far enough ahead of the Z400 for it to matter in a practical sense. Sabrent’s SSD takes third place, and the P5 comes in last this time.

After seeing everything it can do, we’re convinced that the Cardea Zero Z440 is a worthy investment for anyone looking to add PCIe 4.0 storage to their system. The drive consistently scored at or near the top, whichever scenario we put it through.

You should notice the difference if you’re coming from an older NVMe or SATA SSD, to say nothing of the experience that’s in store for first-time HDD converts.

The 12 best deals on video games at Walmart this week

Sat Apr 2 , 2022
We may receive commission from purchases made via links on this page. Pricing and availability are subject to change. The sun is hot, but the action in Assassin’s Creed Origins is even hotter. (Photo: Ubisoft) Spring is here, huzzah! Hopefully you’ve been enjoying the nice weather. All that outdoor fun […] 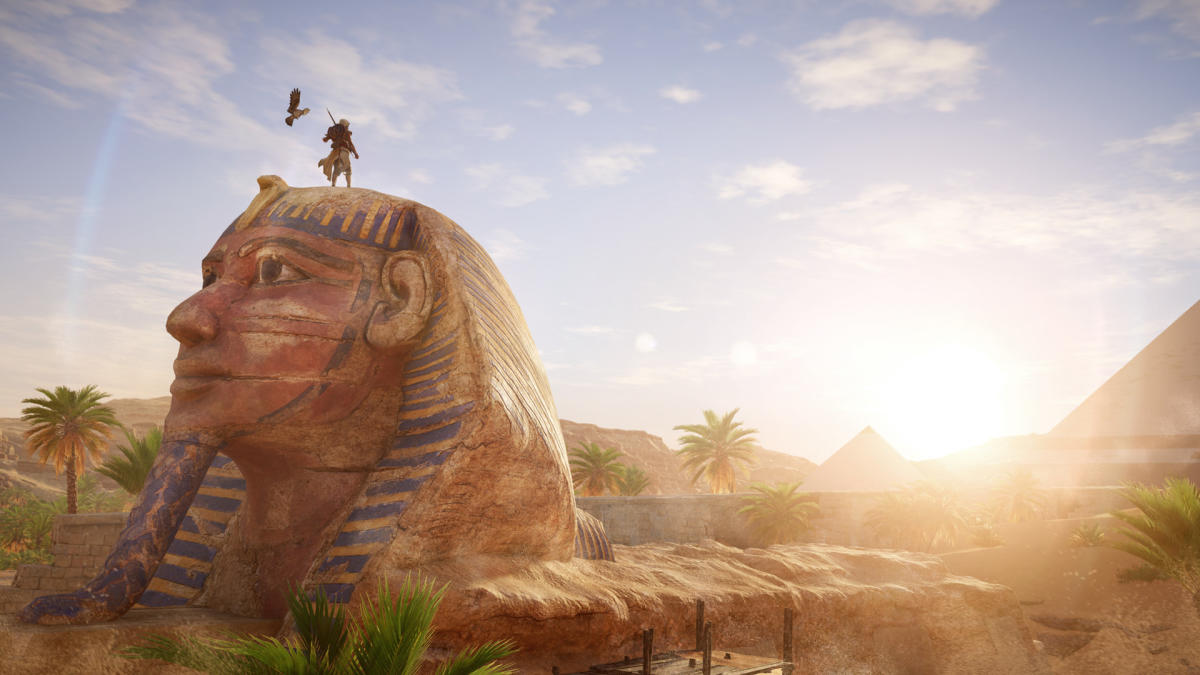